For years Hessam Abrishami’s dynamic compositions, powerful expressions, and vibrant colors have captured viewers around the world with their amazing dept and unique intrigue. He has exhibited the ability to fascinate and disarm an audience with his artistic works. Hessam’s amazing imageries have been lifted off the canvas and portrayed in a three dimensional form through his stunning sculptures. This expansion has added a new dimension to Hessam’s growing artistic repertoire.

By the age fifteen Hessam’s love and obsession with art became evident while still in high school. His art teacher, who encouraged Hessam to pursue a higher education, nurtured his natural talents and endless inspiration for painting. In 1975, Hessam moved to Perugia , Italy, to complete his master of Fine art Degree at the Accademia Di Belle Arti, “Pietro Vanucci”. The bright colors of Italy and the contrast of a quite and relaxed artistic atmosphere greatly influenced Hessam and his works.

Hessam’s works are greatly influenced by his dramatic life experiences and the warm acceptance he has received from the world at large. He has exhibited his art in Europe, Asia and North America, where his one-man shows have grown in popularity in the public eye. His talented works have also been colorfully illustrated in various Ivy League University textbooks nationwide. The French press has called Hessam’s artwork “A statement in the fluidity of human figures…with tension between each figure, a kinship that provokes the viewer to seek reasons for such a relationship.” 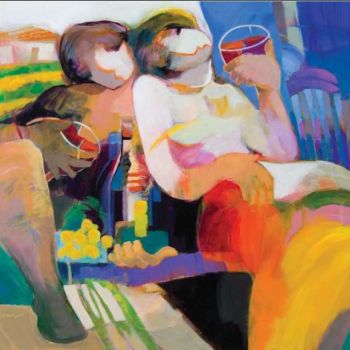