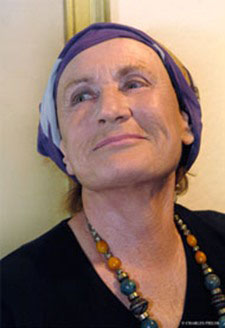 Anne Packard
The painting tradition is strong in Anne Packard's family from her grandfather Max Bohm, a turn of the century impressionist, to her grandmother, great-aunt, uncle, mother, and daughter.
Anne grew up in New York, the daughter of a prominent medical physician. Although she had the desire to be an artist, following the strong painting tradition in her family, her parents coerced her into going to a secretarial school. After a period of working in the City, she married and raised five children in New Jersey. Anne did not take up painting until the age of 30.
Having always summered in Provincetown, Anne moved there with her children in the 70's. It was at this time that she began her career as an artist painting on pieces of driftwood which she sold to passing tourists. Those fortunate enough to have followed Anne's progress since the mid-1970's have witnessed the astonishing evolution of her work.
Her art was initially worked on wood panels from wind drift along the shores of Cape Cod. These smaller bookshelf sized, icon-like images delighted and inspired viewers, vistas of land, sea and sky glowing like jewels. As she became more involved with her art, she studied with the late Phillip Malicoat and also at Bard College. The artist Robert Motherwell saw great talent in Packard and purchased twenty-three of her paintings for his collection. With a greater knowledge and practiced discipline, new directions emerged.
Her studio is the largest room in her bayside home. Working above the tidal edge, in sight of the harbor and the open water beyond, she is kept mindful of the suddenness of nature's changing moods. Her painting evokes the surge of relentlessly driven winter seas as well as the tranquil planes of dunes at rest, or an inviting narrow trail winding through sharp bladed dune grasses.
The Cape, to which Anne has returned time and again, continues to restore her spirit. On that unique longitude, she has always been at home. Through her childhood by the ocean and as a young woman, this world apart has provided nurture. Later, as a mother, she lovingly raised her five children by that same shore. Ultimately, as an artist, her newfound solitude freed her to express her identification with this special place. 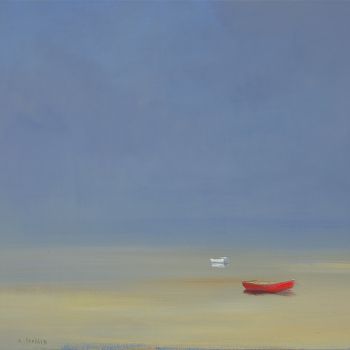